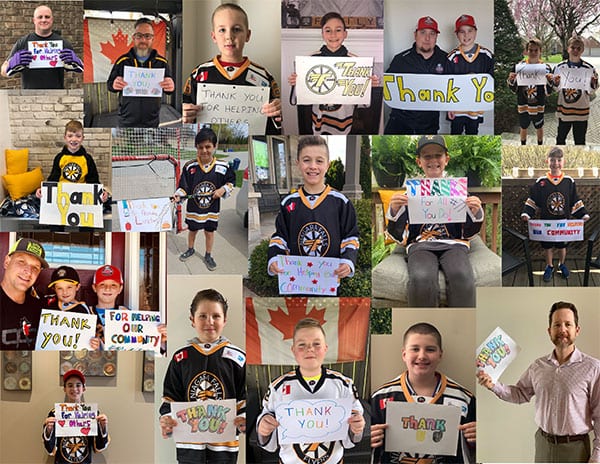 13 May Hockey Team Scores a Win for Community Crew

When the news hit about school closures, and social distancing protocols, we, just like the rest of the world, had to pivot quickly in order to ensure we could continue to reach the children we serve during the school year. For those of you that have been following along, you are probably well aware of our lunch delivery program , as well as our recent fundraising initiative that, thanks to an anonymous donor, was being matched, dollar for dollar, up to $30,000.

The support we have been receiving — not to mention the way the community continues to rally together to help one another during such unprecedented times — is truly awe inspiring. Last week, thanks to the generosity of our community, we were able to hit our campaign goal; and it was the Niagara Falls Minor Atom AA Flyers Hockey team, who put us over the top.

The 15-member team this year swept through its Tri-County league playoffs and were scheduled to start a final series against Milton on March 13, the day the province essentially shut down as a result of the pandemic.

“We had a great practice on the evening of March 12, and could not wait to get started, but we got an email shortly after practice that the season was cancelled,” coach Brandon Boone recalled.

Boone described the team a “close-knit and generous group.”

This group of 9 and 10 year olds whose season was cut short due to COVID-19, decided as a team to take their annual hockey party money, all $400, and donate it in support of our emergency relief fund, along with a collage of pictures of their team holding notes of thanks. This selfless act and genuine care for others is what drives us. It is our motivation and our inspiration. The overwhelming amount of gratitude we have for these future leaders is one that we will forever hold near and dear to our hearts.

The positive impact that they have helped make in the lives of so many other children is one that needs to be celebrated. Niagara Falls Minor Atom AA Flyers, you epitomize the true meaning behind #KidsHelpingKids. Thank you for your kindness and your generosity. You are true difference makers and we are eternally grateful.